'I See to Create and Create to See'

Born in Melton Mowbray, Leicestershire, the artist Duncan Whiteman is to his family and friends a closely guarded secret like many of the ideas that form the basis of his recent work. His early work, Living Sculptures that involved shrouding the human figure beneath an outer Lycra skin designed, exhibited and photographed by the artist were widely exhibited in the 1980’s and 90’s and where in California, USA, he was introduced to the glitterati and digerati who recognized his other talents. In the decade that followed he became immersed in the development of digital technology that today has influenced so much of our lives.

Whiteman stepped away from the exhibition circuit as the new millennium emerged choosing to focus on the public development of digital technology in tandem with his creative work, much of it private supported by patrons, collectors and investors across Europe, Asia, and USA. The bond that connects each of them is their respect and appreciation of his creative vision, the human spirit for beauty, love of our environment and each other no matter our situation. Across all his work is woven subtleties of line, form, colour and light that disguise the complex nature of life itself and sophistication of its algorithms, the underlying DNA that connects every living element with his work. The artist graduated as a sculptor at De Montfort University (formerly Leicester Polytechnic) in 1983 and later moved to Madrid, Spain in 1991 where he lives and works today.

The artists work is held in many public and private collections worldwide and he is always willing to support those who enjoy his work to make a purchase based on what they can afford, so the joy and relationship they enjoy will last a lifetime. Prices may rise reflecting the costs of living that we all share, however, if you like something and would like to make it part of your life then contact the artist here and let the magic happen. A home where the work is enjoyed and appreciated like a member of a family is much preferred and where love grows. 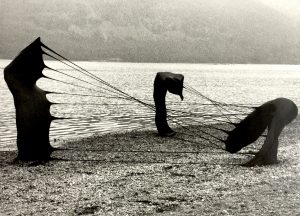 So where does the artist hail from?: Whiteman is perhaps more widely known for the ‘Living Sculptures’ he first developed as a student in 1981. They explore the relationship between the human figure and constructed environment and have since been exhibited, collected and commissioned around the world. Illustrated here: Black Forms in Three Parts, Derwent Water, Cumbria (1984). 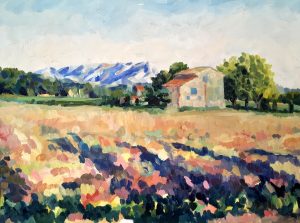 His paintings are more personal, intimate, revealing his passion for colour, light and landscape. Illustrated here: Farmhouse and Mont St. Victoire (1992) Until recently they have remained in private hands, generously supported by a close circle of friends, family and collectors. His recent work sets out to explore through colour and light the land forms and textures he encounters on his creative expeditions capturing the spirit of a place rather than specific detail. They offer us that first glimpse as we turn our head towards a beautiful vista and before we have time to focus on an unexpected scene, breathtaking and almost magical in that first impression, strong enough to both arouse attention and heighten our senses. 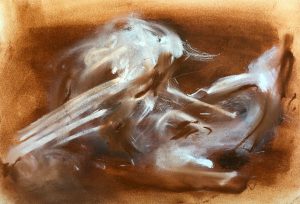 Like most British artists, his approach reflects a formative training and strong narrative in European Art juxtaposed with a desire to question everything, experiment and push the boundaries of representation. Illustrated here: Living Sculpture Study ‘Tension’ in Sketchbook, Conte Pastels (1994)

In his own words ‘I see to create and create to see’ draws upon his formal training by leading artists, Geoffrey Beasley, Patricia May, Kenneth Ford, Susan Tebby, and Theatre Arts Director Stephen Carter. Each contributed towards laying a solid foundation of good practice, research and experimentation. Only when the rules are understood can they be broken. The only limit is your imagination and the only ‘new’ rule is there are no rules!

His approach to ideas has 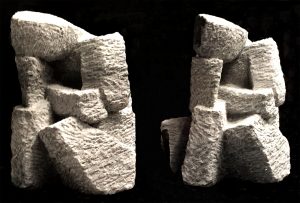 never taken the most direct or obvious route, after all, that hardly ever leads to exciting imagery or break through discoveries. To give one example, whilst preparing to start a major stone carving, illustrated here: Pause for Thought (1981) it is 1.3meters in height and the result of observation drawings, plaster maquettes and photographs. Nothing unusual about that until it was revealed that he was the model cocooned in Lycra in the photographic series, illustrated here: Tension (1981). They provided what he needed to 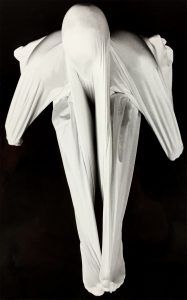 complete the stone carving and opened the door to a completely new creative process by simplifying the human form and removing its identity, it also transformed the live sculptural model into the new object of his work.

This marked the start of an exciting creative period as Whiteman explored every aspect of the human figure as both subject and medium, challenging preconceptions and orthodoxy in British Art. Working with groups that included Sumo wrestlers, pregnant women, babies, disabled people, elderly, soldiers, and dancers, each of whom embraced the opportunity to collaborate with the artist. Not surprisingly the work has attracted international attention. 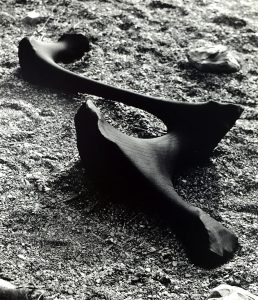 Whiteman embraces traditional and new media with equal passion, whilst mastering their unique properties he is never afraid to experiment, challenge our preconceptions and with nature’s help, creating some exciting encounters!

After a winter storm in the Highlands of Scotland hill-walkers came across what they thought was a lifeless traveler, its clothing only partially exposed through the frozen snow. The story retold by a local barman in Mallaig, recalled how the team frantically clawed away at the ice desperate to release the frozen body only to discover they had uncovered a piece of a sculpture, similar to one illustrated here: Reclining Form – Derwent Water, Cumbria, UK (1989), consisting of selected large rocks cocooned beneath a specially made Lycra garment. Not every encounter is quite so dramatic but each is unique, personal and on equal terms with the viewer and the environment where they are located.

Without doubt his journey is well begun, drawing upon his skill and passion for life and all that comes his way, never afraid of its challenges and always excited about the adventures and discoveries that lay ahead.

We hope this brief introduction has whetted your appetite to know more. The selection of work featured on this website, much for the first time as an appetizer and all are available for sale directly from the artist.

Update 2021: Doesn’t time fly… At the time of writing a number of publications featuring recent and past creative work are in progress and a short film! Further details about their release will be announced here first and through various online media channels. You are invited to follow: www.instagram.com/duncanwartist/

If you would like more details about the artists work including the Living Sculptures, static wrapped sculptures, limited edition maquettes, photographs and videos, early digital art and 3D animation, please don’t hesitate to use the Contact Form.